Family Health West began with a passionate and hardworking group of people who wanted to have more accessible health care in their area. Today, Family Health West offers a wide array of health services and has revolutionized care for degenerative diseases. 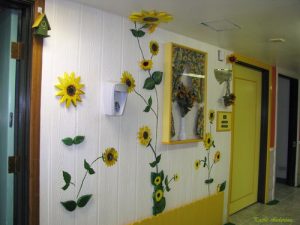 Family Health West began with a passionate and hardworking group of people who wanted to have more accessible health care in their area. In the 1940’s, many families did not own cars and traveling to Grand Junction for health care was a burden. This burden prompted the construction of the Lower Valley Hospital. Farmers originally used their beet trucks to transport lumber, bricks, and other supplies from Utah to Fruita to begin the construction. The hospital opened its doors in 1946 and was immediately established as a non-profit.

Since its beginning, the rural hospital was incredibly progressive and forward-thinking. “They did everything: they delivered babies, surgery; they were progressive and took care of all the medical needs of the area,” says Angelina Salazar, Director of Community Relations at Family Health West.

In the 1980’s when Western Colorado majorly suffered from the energy bust, Family Health West almost closed its doors. They began to look for ways to survive the rough economy. With an aging population, the hospital shifted towards a nursing home model and put an emphasis on Alzheimer’s and elder care. “At that time, because so little was known, the way most facilities treated Alzheimer’s was sedation; they did not know what else to do,” says Angelina. It was during this time that the Family Health West was put on the map for their innovative Alzheimer care model. Instead of sedating those with Alzheimer’s, Family Health West socialized and interacted with the patients. “Care providers would go to where the patients were mental. If a resident were talking about getting on a train in 1930, then the caretaker would pretend it was 1930; not correct her and tell her it was 1985, which caused panic for the resident,” explained Angelina. This simulation model was so innovative that people from Switzerland to Japan were visiting to learn about the unique approach to Alzheimer’s care. Today Family Health West remains a leader in providing care for those with degenerative diseases. 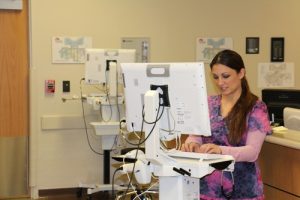 Because of the emphasis on the nursing home, while the hospital was still there, it was almost forgotten. In the 1990’s, as the economy bettered, the outpatient clinics, now located in the Kokopelli Plaza near the Dinosaur Museum, were constructed. The creation of these clinics helped Family Health West remain true to their mission as a nonprofit. After more demand, they then built a new hospital in 2009. The city of Fruita and the school district donated the land that the hospital was built on. The new hospital is 42,000 square feet and was the result of the community coming together. Before the open house, the staff realized there was no art on the walls of the hospital. Each piece of artwork was donated by talented staff and the Museum of Western Colorado. “We just went gangbusters at this new hospital. In two years we were at capacity,” says Angelina. From then on, the services at Family Health West have continued to expand. Fruita alone has a population of 12,000, and this is projected to grow even more due to the popularity of the recreation in the area. Today, Family Health West offers the following services: 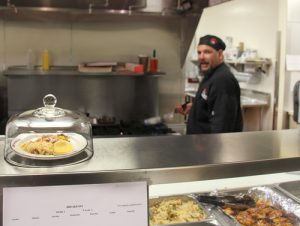 Since 2007, Networks Unlimited has supplemented Family Health West’s IT Support. We have worked alongside their in-house IT staff by providing services such as automatic backups and antivirus. Angelina says, “You can tell you have a cohesive team by the way you communicate. It’s evident that you all love what you do.” She also appreciates the fact that Networks Unlimited’s staff is never condescending to those who do not speak ‘tech.’ “They provide education and empower their clients; it’s quite refreshing,” says Angelina of our support.

“I use the consult-IT service most often,” says Patrick Yount, IT Director at Family Health West. Consult-IT is one of our newer service offerings. It is designed to give in-house IT support staff direct access to our diverse team of engineers for a fixed monthly cost. “I think I have called Joe about ten times this month,” Patrick joked.

We are happy to support the IT needs for such a big staple in our community and look forward to seeing where Family Health goes next!