Western Filament, Inc. was founded in 1938 and has focused on textile manufacturing fibers since the beginning. While the early days were primarily concentrated on laces for shoes and corsets, Western Filament is now an approved supplier for Panasonic, Boeing, Rolls Royce, Lockheed Martin, Northrup Grumman, USA and NASA! 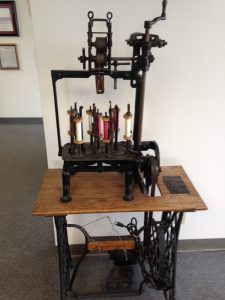 Western Filament, Inc. was founded in 1938 and has focused on textile manufacturing fibers since the beginning. While the early days were primarily concentrated on laces for shoes and corsets, Western Filament is now an approved supplier for Panasonic, Boeing, Rolls-Royce, Lockheed Martin, Northrup Grumman, USA, and NASA!

In the 1940s, the first synthetic fiber was created (nylon) and Western Filament collaborated on the development and creation of specifications for parachute cords. Since then, they have continued the path towards high-tech industrial products using synthetic materials, such as polyester, nylon, Kevlar, NPTFE, Spectra and more. These materials are utilized in the target markets for Motor Manufacturing, Automotive, Aerospace and Recreational Fishing, to name a few.

With over 70 years’ experience in manufacturing and processing man-made fibers, they are considered a specialist in braided, twisted, coated and dyed fibers. Western Filament has even been featured on the popular Discovery Science Channel show, How It’s Made. The show featured the making of their TUFLine brand of fishing line. On February 1, 2016, and for the sixth year in a row, Western Filament received the prestigious 2015 Silver Boeing Performance Excellence Award, which recognizes them as a supplier who achieves superior performance. Boeing rates vendors based on a 12-month period and Western Filament is one of only 423 suppliers to earn the Silver Level ranking.

Even though Western Filament supplies their products to large companies, their business completes those big orders with a staff of 95. In a small business where people wear multiple hats, Benj TerLouw was filling the IT role in between his regular duties of Engineering Manager and Quality Representative. “There is not enough work for a full-time position, but it was getting impossible to complete these tasks around daily responsibilities, TerLouw stated. “Networks Unlimited was very professional. When suggesting equipment and services for our company, Networks always backed up suggestions with reasons and examples.” TerLouw continued. Western Filament wanted to get out of managing their IT services and equipment and felt Networks Unlimited was the right choice for their company.

During the implementation of changes, NU was polite and responsive. Nancy Reynolds, Administrative Specialist, said, “The staff at Networks Unlimited learned our team’s names and called everyone by name when working with them. They [Networks Unlimited] made it convenient for office staff to get their computers worked on around their workloads.”

Networks Unlimited looks forward to a continued partnership with Western Filament by getting to know more about their business needs and their employees and fulfilling their IT needs.

To learn about Western Filament, visit their website: http://wfilament.com