Windows XP has not been supported by Microsoft for 6 months now. The 13 year-old operating system had an impressive run, but those still running it should really consider upgrading.

Windows XP has not been supported by Microsoft for 6 months now. The 13-year-old operating system had an impressive run, but those still running it should really consider upgrading.

Hackers have found ways to exploit the dated system and reports show that many XP machines make up large botnets. The Home Depot and Target data breaches were reportedly allowed by an exploit in Windows XP which was used in their point of sale systems.

If you still have an XP machine, you’ve probably been on Windows XP for some time now. You are familiar with it, and overall, you are pleased with it. However, it is time to change. In that case, you probably have some questions, and we’re here to provide answers for you.

WHY SHOULD I UPGRADE?

Security Vulnerabilities: Each week, Microsoft releases security patches for each of their current operating systems. After April 8th, these patches will no longer be made for XP. PCs with XP will be more vulnerable to viruses, spyware and other malicious software.

Compliance Issues :   Laws require certain industries to comply with security regulations, such as HIPPA. If using XP, industries regulated by HIPPA, and others will no longer be compliant with the law because of the lack of security with XP.

Lack of Software Support:    You will no longer receive free, or paid, support from Microsoft for XP.

Hardware Compatibility: Drivers, or programs that machines run on, for new devices such as printers, scanners, routers, etc., will not be available for XP machines. For instance, if you purchase a new printer and you are running Windows XP, that printer will not print anything sent from the XP machine.

WHAT SHOULD I BUY? 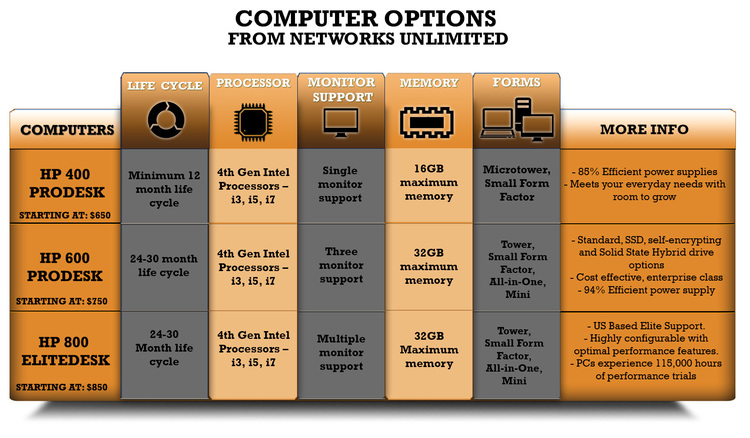 CAN I STILL GET WINDOWS 7?

Yes- Windows 7 is still available. Here are your options. 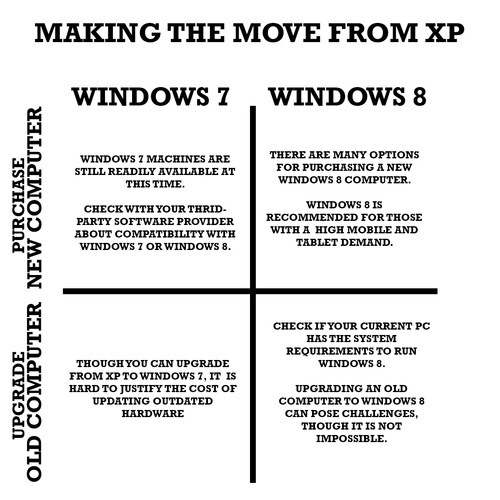 WHAT ABOUT WINDOWS 8? WHAT SHOULD I KNOW?

You may or may not have heard opposition to Windows 8. Either way, it can be a good option for traditional PC users. Read more here.